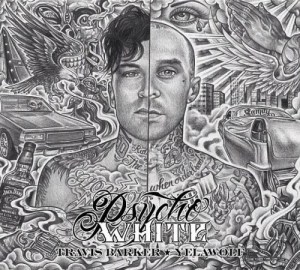 On the heels of his Radioactive debut, Yelawolf went on tour and soon announced he was working on a new album. Before he was signed to Shady Records, Yelawolf received comparisons to Eminem. With completely different rapping styles, the two rappers sounded alike.

Yelawolf soon announced his sophomore album, Love Story, which he discussed earlier in the summer of 2012. However, with his debut album still fairly new, no release date for the project was announced. Instead, Yelawolf announced his Psycho White EP, which is a joint effort with Travis Barker.

Recently, Yelawolf and Travis Barker released the official artwork for their EP, along with the track listing. Tim Armstrong and Michael Myers are among the artists who will be featured on the project. In November, their EP will be released to the public.