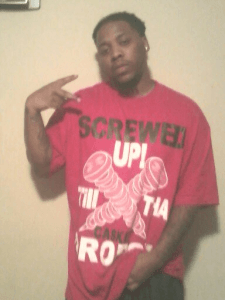 A definition of someone going after what they want as honestly as possible is sincerity. Usually, when someone sincere in their efforts attempts to connect, they end up with long-term success. So far, this has been the case for S!NCERE, a rapper who grew up in South Carolina. Currently making a name for himself in Georgia, S!NCERE feels he is on the cusp of greatness.

S!NCERE is now located in Austell, Georgia, where he is advancing his rap career. Since the age of nine years old, S!NCERE has been writing music. This writing soon led to S!NCERE pursuing a full-time career as an artist. The ambitious rapper has since had the opportunity to record and release new music, but has more tracks in store.

With his songs already getting radio play on such internet radio stations as Radio Invasion, S!NCERE is taking steps in the right direction. S!NCERE recently spoke to Hip Hop Vibe about his upbringing in South Carolina and what inspires him to make music. No pun intended, but S!NCERE lived up to his name during his interview.

Where did you grow up? I grew up in Marion, South Carolina. I lived with my grandmother.

Did you consider music to be your escape growing up? Yes, it was an escape for me.

You played football growing up, are you still a fan? Yes, I’m a huge fan of football.

Why did you choose ‘S!ncere’ for your rap alias? I chose S!ncere as my rap alias because I wanted to be named something similar to the truth.

How long have you been rapping, as ‘S!ncere?’ I haven’t been rapping as the name S!ncere for very long, only a couple of months.

Have you released many projects? So far, no, I have not released any projects. this will be my first one. Hopefully I will make a break into the music industry.

So far, which one has been your most-successful? As of now, the song I wrote, called “Want You,” is the only song I have released that’s out doing something to become successful.

You said you want to “show everyone what you’re about,” exactly what is that? When I said that, I meant I want to show everybody that I’m not just another rapper trying to get money off of one song and quit. I want to change the swag of rap instead of just rapping about the same thing.

Who are some of the people you hope to work with in the future? There are many artists I would like to work with in the industry. But, a few I will name are 2 Chainz, Young Jeezy, Lil’ Boosie, Bun B, Lil Wayne, Chris Brown, Rick Ross, Meek Mill, Wu-Tang Clan, Plies, Yo Gotti, Future, Gucci Mane, and Waka Flocka Flame.