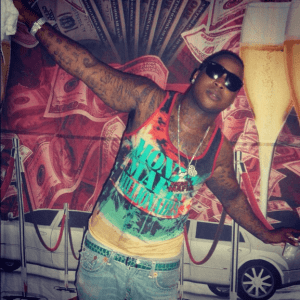 Over the past two years, Young Throwback has been making a name for himself, outside of his own family ties. Young Throwback was initially known by many as the younger brother of 1017 Brick Squad leader, Gucci Mane. Alongside Gucci Mane, Waka Flocka Flame, and OJ da Juiceman, Young Throwback is also member of the So Icey Boyz.

Earlier this summer, Young Throwback released his Red Bulls & Molly mixtape. He is fresh off the release of his Zone 6 Trappin’ mixtape, which is hosted by DJ Ransom Dollars and DJ Speechless. Hip Hop Vibe recently spoke to Young Throwback about his previous crew, his current Money Mafia Millionaires movement, and his mixtapes.

Did you imagine the movement growing the way it has? I have expected this, because we are all talented and ambitious. When we want something, we get it. I am a perfect example of that with what I am doing with Money Mafia Millionaires.

Can you discuss your brotherly relationship with Gucci Mane? I put God first, when you do that, you always put family first. I am an individua personl. At the end of the day, everyone knows what it is. I want to make it clear, I put family first, but I do not want to stand in anyone’s shadow. Family is first, but business is business, and I want to brand Money Mafia Millionaires.

Who are some artists on Money Mafia to look out for? Shouts out to my boy, Popa Sosa from South Carolina. Payne, who is Cashout/Money Mafia. I have a lot of other non-artists on my roster. There are people who go to school and work, when I recruit people for my team, they have to have multiple things going on. I am opposite of most people, most go after street dudes, I also go after workers.

What was the energy like as you recorded Zone 6 Trappin’? Oh man. The energy on that mixtape was hungry hungry hungry hippo. I needed people to hear my story. Understand what I am doing and where I am trying to go.

How did you go about choosing the DJs for the mixtape? A lot of DJs were not eager to get on the tape. I am branding my company, myself. Many DJs questioned why I did not work with my family. See, I like DJs on my level, who are hungry. I didn’t work with DJs already on, because I felt like they only wanted money. That is only how I felt, we have a lot of hot DJs in Atlanta, I just don’t understand. Shout out to all the DJs in Atlanta though.

In your opinion, what is the best aspect of your mixtapes? Indivudualization. Red Bulls & Molly was produced entirely by Zaytoven. All of my projects are different, never the same.

Do you feel Zone 6 Trappin’ will reach its full potential? Yes, as long as I believe in God, it is going to reach as far as it is supposed to.

For those who don’t know, tell them more about who Young Throwback is? Young Throwback is a grown, indivdual man, an artist who has struggled most of his life. Becoming a man, he is doing things on his own. I really dislike it when I am called Gucci Mane’s little brother, because I am my own person. I am out here making a name for myself. When people call me Gucci Mane’s little brother, I let them, but alone I let them know who I am, myself.

Will fans be seeing more of Young Throwback here in the closing months of 2012? Oh yes. On top of the next mixtape, Secret Sauce: Mind on Millions is coming in November. I have a new song called “Goons,” produced by Zaytoven, and the video is coming soon. There is a lot to look forward too. One thing about us, when we start dropping that music, we don’t stop.

Who can fans expect to see you collaborating with in the next few months? I am looking forward to more work with Gucci Mane and all up and coming artists are welcome. I am working with Mike WiLL, a video with OJ Da Juiceman, “In & Out.” Also, a video with Montana da Mak. Sonny Digital, Zaytoven, Lex Luger, are some producers I am working with. I prefer working with producers over artists, because it is competiton with other artists.

What do you see for yourself in the near future? I see myself getting more blessings from God, making more music, helping the youth, letting them know what we do is only entertainment at the end of the day. A lot of rappers may be against that, but we’re only entertainers, a lot of kids are losing their life and freedom over the stuff we say. I want to make a difference in the urban community.