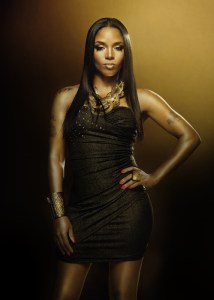 Atlanta has been a longtime home of musical talents, producing stars for over four decades. In recent years, many of hip hop’s biggest stars have come from the Georgia capital. More recently, Atlanta has become home to numerous reality shows. It was through the latest Atlanta reality show, VH1’s “Love & Hip Hop Atlanta,” Rasheeda was re-introduced to the game.

Both a rapper and a singer, Rasheeda has spent close to two decades in the game. Since 2000, Rasheeda has been a solo artist, releasing six albums. The name of her latest album isBoss Chick Musicand it was released back in June. It was June when “Love & Hip Hop Atlanta” launched and fans got to see the personal side of Rasheeda.

Hip Hop Vibe recently had the opportunity to speak with Rasheeda. During her interview, Rasheeda spoke to us about “Love & Hip Hop Atlanta,” her Peach Candy group with Kandi, who happens to star in another Atlanta reality show, “The Real Housewives of Atlanta.” Rasheeda would also speak on reality television and her Boss Chick Music album.

How did you wind up on “Love & Hip Hop Atlanta?” They were casting for the Atlanta version of the show. My name came up several times and we held a meeting and I was picked.

Did you enjoy your overall time on the series? It was a hell of an experience, being on reality TV and then appearing on the biggest show on television. It is enjoyable, but it is also hard work.

Can fans expect to see you back on the second season? Yeah! You will see me (laughs).

You recently released the music video for “Legs to the Moon” with Kandi, what was it like working with her again? We see each other all the time, so it was just a day of fun. We do that all the time, it was nothing new.

What is the status of your Peach Candy group with her? Right now, we are so busy with our shows, it is hard for us to get together and do a lot of songs together. We do link up and try to give the people some Peach Candy, but I don’t think we will have enough time to get a full album done any time soon.

Do you watch her often on “The Real Housewives of Atlanta? Yeah. Of course.

How do you feel about the reception of your latest album, Boss Chick Music? Oh! It’s doing good. I put the music out there right before we even dropped the “Marry Me” single. We decided to drop the album online, only, and it is doing well. Now, “Legs to the Moon” and the album is doing great.

Is the album doing as well as you expected? I didn’t really have specific expectations for the album. In today’s landscape, being an independent artist, I didn’t expect much. I just went in there and did some music for the people, keeping them updated with what has been going on.

Do you feel the album will open the door to something bigger for you? The biggest door has been opened with the television. Having the television platform is working hand in hand with my music. The people who are tuning in to the show could buy the album, but the television show is much bigger than the album.

What are some other projects you have in the works? I have a cosmetic deal, a hair deal, both in the works. I also have a website, where I sell products, iambossy.com. Soon, there will be additional products on the site. It is a blessing, I am considering opening a real store. I am also on the road a lot, doing shows and parties. I am really getting it in.

Are you pleased with your overall image in the eyes of the media? Of course, you’re not pleased. The system is not made for you to look good, all of the time. But, this is how the media and society is, they build you up to tear you down. Not just me, people do not want to focus on the positive, they mainly focus on the negative, it brings more views. That is the nature of the business though.

Before the end of 2012, what are some things you want to do? I want to open a physical store. I have more things I want to do, including expanding my brand and becoming a bigger entrepreneur.