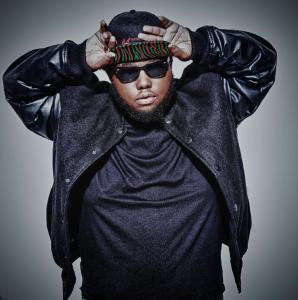 The year of 2012 has been full of pleasant surprises, among them the unexpected return of the “Prince of the South” Lil’ Scrappy. After leaving Ludacris’ Disturbing tha Peace, Lil’ Scrappy took time off to release The Grustle. Early this year, Lil’ Scrappy returned and fans soon learned popular Washington, DC rapper, Rolls Royce Rizzy, was his artist.

Rolls Royce Rizzy has lived all over the world, due to his father being in the military, but called Washington, DC home. Until the emergence of Wale, back in 2009, the hip hop scene in the nation’s capital was virtually nonexistent. However, Wale opened doors for DC-area artists, eventually signing with Maybach Music and gaining more success.

Those who have tuned into Rolls Royce Rizzy know he is preparing his own takeover, starting with his God Got Me mixtape, which will be released next week. Hip Hop Vibe recently had the opportunity to speak with Rolls Royce Rizzy. During our conversation, he discussed his background, Washington, DC hip hop, Lil’ Scrappy, and his new mixtape.

How many places have you lived, all over the world? Wow, that’s a lot. California, Hawaii, Texas, DC, Virginia, Japan, I have lived in seven to eight places. Most importantly, the DMV, and now I live in Atlanta.

What was your life like in Washington, DC? I grew up in the area, I did a lot of my middle and high school years there. When I jumped into music, I was living there. I developed a part of my style when I was living there. But, I have taken from everywhere I lived, which has made me a versatile artist. I like the culture out there, the go-go music, and the nightlife. Matter of fact, I will be in DC this October for a little promo tour.

When did you first see yourself becoming a rapper? When I was thirteen years old and I got my first computer had Magic Music Maker 2004 and a microphone. I was trying to develop my rap style then. But, my cousin was already rapping and he named me Rizzy. Soon, I learned how to do it and I have continued growing.

Since the success of Wale, Washington, DC is becoming a hip hop powerhouse, what is it like? I feel like there has always been a hip hop scene there. But, I feel Wale is the first artist to breakout and have mainstream success. On the local scene, there is also Tandy Bonet, who is making an international name for himself. However, a lot of DC rappers have gotten inspired by watching Wale’s success. Seeing someone from your area make it really inspires others. A lot of people who knew me, who see me doing my thing on MTV and on tour, always text, tweet, and email me, telling me I inspire them to go after their dreams. Wale opened the door for those who were from the area and felt like they would not be able to make it. Not only DC, but the entire Maryland and Virginia area, as a whole.

Growing up, did you listen to Lil’ Scrappy? I knew Scrappy’s hits. The first time I ever saw Scrappy on TV was the “No Problem” video and I loved the song. I knew his music and I also liked his “Money in the Bank” single. Lil’ Scrappy has always made music I enjoyed, but more of my favorites were Fabolous and Jadakiss. However, Lil’ Scrappy never made a single I did not like.

What was it like, meeting him for the first time? It was cool. Honestly, I was not very excited, because I had been opening up for a lot of mainstream artists. I received the same vibe from most of them, some are Hollyood, others are more open. But, with Scrappy, it was real. When I told him what I wanted to do, he began helping me. No other major artists helped me, but Lil’ Scrappy did. We were in Tokyo, he performed, killed the show, and then we chilled backstage. It was very cool.

How has your career benefited from having Lil’ Scrappy involved? I have always been a hard-working person, chasing my dreams, even before I met Lil’ Scrappy. I toured with Three Six Mafia. But, with me and Scrappy, it was all about location. When he gave me the opportunity to move to Atlanta and work with him, it opened doors for me. Lil’ Scrappy told me working with him would not guarantee immediate success, but he promised to open doors for me. He does everything he says he will and he knows the game, being the highest in the game and being at the lowest point in the game, at different times.

Did you watch Lil’ Scrappy on “Love & Hip Hop Atlanta?” Of course.

What is it like, being a part of the Grustle Gang? I’m different, me as an artist, I stand out from the other members of the Grustle Gang. I am trying to go into a different lane. I am not just trying to just do club songs, I am trying to do real hip hop. For the most part, I am on something else. Lil’ Scrappy said Grustle Gang is for everyone, he is trying to get some rock artists on the label. It is good to travel and work with a major artist. Being an independent artist, it is great to have access to everything I can in being a part of this movement. Right now, it is me, Scrappy, me, Hawk, who has a mixtape coming out, and Menace, who has a mixtape coming out. They primarily do trap music, I have a broader audience. But, at the same time, I am branding Rolls Royce Rizzy.

Exactly a week from now, you will release your God Got Me mixtape, are you excited? I am more than excited. I’m geeked up, this is my blood, sweat, and tears, and I am waiting to see what the people think.

Who did you work with, as far as producers and collaborators? Shout out to DT Statesley, from Panama City. I think I might actually sign him. Soon, I will sign a couple of producers and build my own company. I worked with Streetz, from Raleigh, North Carolina, he has worked with 9th Wonder and others. Artists, I worked with Chevy Woods, Pill, Hal Linten, from the Barbados, an R&B artist, Fat Trel from DC, of course I worked with Lil’ Scrappy and the Grustle Gang. There were a lot of other people I wanted to work with, but did not have time. But, they will be on the next project. On this project, I wanted to just make sure everything I did was for me. I want this to represent everything Rizzy is. Everything on this project is what Rizzy wanted, so this will be a good representation of me, without input from anyone else.

How do you feel God Got Me will impact hip hop? I made God Got Me for myself and not really to impact hip hop. Whatever it does and however people receive it, I will love it. But, this project is all about how I feel. I wanted to be 100% truthful about who is Rolls Royce Rizzy. I know there are a lot of people who feel the way I feel about certain things. A lot of people can relate to the music I put out and a lot of people relate to Lil’ Scrappy and the Crunk music, same with Pitbull. I did this one for myself, this is what I wanted. A lot of music I did in the past for a lot of other people, the club, the DJs, the fans. Now, I don’t give a fuck about what the other people want. I am focused now on branding myself and my own movement. I have my own label and clothing line in the works, so if I focus on what I want, stick to my opinion, and put out good music, I feel these people will become my family, more than my fans. If it changes hip hop, it changes hip hop, that would be crazy, but this one is just for me.

Will you be going on tour after the release of God Got Me? Right now, God Got Me drops in a week and I have God Got Me week. Mixtape release party, feed the homeless day at the bowling alley, and then I will be doing the promo tour, which launches in Tallahassee. We are in full effect on this tour.