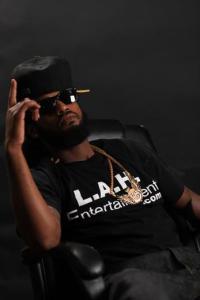 Increasing in popularity is the Charlotte hip hop scene. Charlotte has risen to the forefront of the media, as the 2012 Democratic National Convention is being held there. North Carolina is one of the fastest-growing states in the United States. With Charlotte being the largest city in the state, many opportunities have opened for the city.

Many compare Charlotte to Atlanta, as both are fast-rising cities in the South and are great places for the urban youth. However, despite having the larger population, Charlotte plays second fiddle to Atlanta in nearly all forms of entertainment. Growth is apparent in Charlotte in all forms, however, and hip hop especially. One artist in Charlotte making noise is Dee Dray.

Dee Dray has had the opportunity to collaborate with many of the biggest artists in the game. Signed to LAH Ent., Dee Dray is quickly separating himself from the pack. Recently, Hip Hop Vibe had the good fortune of speaking with the rising star. During the conversation, Dee Dray discussed the Charlotte hip hop scene, his work with several Brick Squad artists, and his work in Charlotte.

How many years have you been making music? I’ve been creating music as long as I can remember. I began playing drums in church at the age of three. I started writing music around the time I learned to write and began writing hip hop lyrics in high school.

What does it feel like, coming from a relatively new hip hop city like Charlotte? Well, I come from two relatively new hip hop cities both Buffalo, New York and Charlotte, North Carolina. I was born and raised in Buffalo, but grew up and became a man in Charlotte. Both cities aren’t known for music, but it’s something many of us are working to change. It’s a great experience because there are no blueprints already laid out. You can approach the game with a new perspective, new style, and new sound and be one of the first ones to put your city on.

What is the energy like in Charlotte? The energy here is great. Charlotte is like the United States in the form of a city. It’s a melting pot with so many different cultures, ethnicities, and energies. We have several of the largest banking systems here, two professional sport teams; we have been the host city for the CIAA and the Democratic National Convention 2012 (DNC).  Of course there’s always going to be some negative energy between some of the artist, but that happens everywhere. I (we) just stay focused on what we have to do, the goal and bigger picture and keep progressing. We can’t worry about the hate because when there’s love there will be hate.

Aside from yourself, who are some other artists in the area making noise? The whole team; LAH Ent from the CEO Pimp’N Ken, Zee Coffee, ShaTown and Drumma SC with help from our Vice Presidents: Jay Nino & Dudda along with Jersey, on the comedy side of things. Other artist in the city that I like are Tiz, Dean, V.I.P. the God, and my extended family over at Tiger Eye Management with my brother J. Prag.

How did you link up with Gucci Mane? We just connected and made it happen. We were not physically in the studio together.

Do you see yourself collaborating with other members of 1017 Brick Squad? Definitely. I love the energy Waka Flocka Flame and Gucci Mane have.

Who are some other major artists you have had the chance to work with? 2 Chainz and Future.

Is it important for Southern artists to eventually make the move to Atlanta to gain a bigger fan base? I was told not to chase a deal or go looking for labels; make the deal and labels come looking for you. If you’re doing what your suppose to be doing, then you can be living in Alaska and they will come get you. Especially in this era of computers and technology. Your music can be everywhere without you being there physically.

Do you feel Charlotte can become a mecca, like Atlanta, for hip hop? Charlotte is becoming one of those cities that people have to take notice of. It’s an untapped market with a bunch of talent. Everything takes time. Rome wasn’t built in a day. However, it is going to take a collaborative effort from the artist working together, along with the radio stations, radio personalities, and the people living here to support the “Local Artists”. An artist is only local until his city helps put him out there and on.

Who are some of the Charlotte artists you have been working with? I’ve been working with everyone on LAH Ent., my brothers from GoodEyE Media, Jay Moore, Vinny Knuckles, HurriKane, The Squad 1 Mic Conglomerate, along with a bunch or singers I’m writing for and whoever else wants to work.

How do you feel about your own buzz right now? My buzz is developing and growing daily. It’s just about being consistent and staying as relevant as possible. I can always grow and improve. I’m not where I want to be, but I’m not too far, of course. Once a person gets complacent, there is not more room to grow so I just maintain my hunger for more.

Would you safely say you are one of the biggest rising artists in the South right now? (Laughs). I would say that I’m one of them. But, I’m the best one doing exactly what I’m doing. Being myself and keeping my integrity in my music.