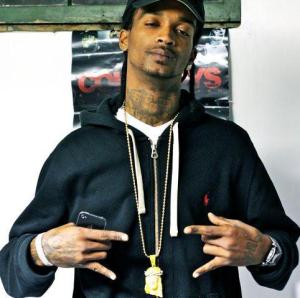 With French Montana now a major label artist, the Coke Boys’ movement is stronger than ever. Chinx Drugz is also turning himself into a household name and Coke Boy Brock is picking up where French Montana left off with the mixtapes. Droop Pop is also making a name for himself, showing up to support his partners in rhyme.

Hip Hop Vibe recently had the opportunity to speak to Droop Pop. During our conversation, the Coke Boy spoke on the success of the group, New York hip hop, and his new mixtape. With several mixtapes out, Droop Pop has several songs out on the internet. Droop Pop would discuss this and much more.

How do you feel about the success of the Coke Boys? I feel like it is a great thing. Over the years, we were not taken seriously, just because of our name. But, we made it a positive thing and we have gotten better and better.

Would you compare your success to that of 50 Cent and G-Unit? I compare French’s success to 50. We are like how they were when they started off. Right now, we are the hottest in the streets with the mixtapes and shit. A little bit more time and we will be on that level.

Can you tell us how you feel about Coke Boy Brock’s recent mixtape run? That shit wavy. Especially that “Blood Brothers” track that I’m on. Every mixtape he puts out is hard. We are from the same block, me, him, French, and Coke Boy Cheeze. We all have that same pain.

What was it like recording with him, once again? It’s like every other time, we have fun when we record. It’s fun, but at the same time, we’re making some chicken (money) together. It’s always the same with me and Brock.

How do you feel about the overall resurgence in New York hip hop? I feel good about it. We are a big part of that. To sum it up, I feel good because we’re playing a part in it.

Can you tell us more about your 2012 mixtapes, Pillsbury Pop and What U Need? Yeah. What U Need was with DJ Big Mike, the best DJ on the East Coast, aside from DJ Drama. Connecticut is the place that shows me, and the other Coke Boys the most love. I have not done a mixtape release party for it, but I will in a few. Pillsbury Pop is also good too, but it’s pushed by DJ Stylez, he’s a part of DJ Lazy K’s movement. In the future, I will be working with DJ Lazy K and DJ Diggz. DJ Stylez is from Bermuda and I want to take a trip out there soon.

What is your relationship like with DJ Diggz and DJ Big Mike? My relationship is strong with every DJ I work with. With DJ Diggz and DJ Lust, our relationship is regular business. They work with Coke Boy Brock. But, with DJ Big Mike, that is my brother. Working with French, I have gotten to know him well over the past four or five years. Two years ago, I began focusing on the music very hard and DJ Big Mike has been there with whatever I want and whatever I need. At his birthday party, we were there performing. DJ Big Mike is now representing that Coke Boys wave too.

You are currently working with DJ 5X for Notorious Punishment, Vol. 10, correct? Yes.

Can you talk a little bit about it? DJ 5X, that was set up by Mack Drama. He’s down with the Brick Squad team and he is real cool. Our project will be released in the middle of September. I will have the chance to really build with him over the next few weeks, as we begin promoting the mixtape. Mack Drama is co-managing me, so he set that up.

When will fans begin to see more of Droop Pop? This year, they will see a lot more of me. Right now, I got thirty to forty shows lined up. No matter where French is at, I will be with him. Everywhere he goes, you will see me. But, with my own career picking up, I have to make my own appearances. When you go on Twitter, all you see is my name up there, I am making big moves.

Redman, Dollarmentary, and K-Solo at Rock the Bells 2012 [PHOTO]
JR Writer to premiere “Do or Die” music video on Hip Hop Vibe on September 7