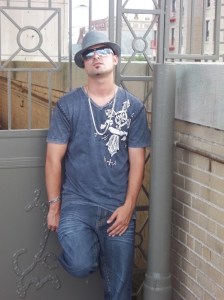 With hip hop now being an international genre of music, it has become more common for rappers to have traveled around the world, or at least their native country. Following the path of J. Cole and many others, Cluniac has lived all around the United States. Born in Houston, Texas, Cluniac lived in various cities before settling in Florida.

Moving to Florida, Cluniac quickly found a home for himself. Soon, Cluniac would link up with JG, who would become both his best friend and business partner. Both had a love of hip hop music, so they decided to fully pursue a career in rap. When speaking of JG, Cluniac said he is very close to him, so close he considers him to be family.

Was it your childhood background which led to your specific style of rap? Yes. Certain trials and tribulations led me to put my lyrics down the way I do.

What was it like growing up in the home of a single mother? My mom is a strong woman. Now, I wish it was a lot easier for her because me and my brother were tough to raise. When she wasn’t around, we made our own decisions at a very young age.

Did your mother accept your career choice as a rapper at first? Without a doubt, my moms was my backbone. I recorded my first track at 14 and she was the first to hear it. She knew I had something to prove to the world when I did my first show at the age of 11. I performed at almost every talent show in middle school.

How did you and JG meet? JG? When I moved to Florida, I felt very left out, people used to make fun of my Northern accent. Plus, I couldn’t relate to anyone down here until I met a group of kids just like me. We were from Oldsmar. My boys were all from up North and we clicked instantly. JG became like family, alongside a few other friends, but he’s the only one that really pushed me to be where I’m at right now. I was lyrically sick and he knew it. JG stood by your boy’s back through numerous pointless street brawls to domestic family problems. That’s my brother.

Would you say you guys were instant friends? No doubt, usually people like us feel people out first before kickin’ it, but instantly we realized we had the same fucked up sense of humor. That’s the only cat I know that would laugh at the sick shit that I laugh at.

When did you two launch Open Fist Records? In early 2008, Open Fist Records was born as a label, but Open Fist was our click before it became a record label. There were certain people that deserve just as much credit as us two for the birth of Open Fist.

How would you describe the grind of an independent artist? We know nobody is going to hand us shit. These days, you got to take matters in your own hands and make your own decisions, regardless of what anybody says. If you’re confident and you want to work, you will do what you want as an artist, bottom line.

Do you think there is a stigma against white artists in the rap game? No! Look at Eminem, the dude is fuckin’ talented. Everyone knows it, too. As a kid, I grew up listening to the Beastie Boys. Race, in my eyes, has nothing to do with hip hop.

Can you talk about your upcoming mixtape with DJ Symphony? The project I’m working on with Symphony is called Everyone’s Got A Gun, due to drop November at the latest for free on DatPiff.com and other sites.

Do you see yourself working with DJ Symphony again? Oh yeah, my dude does what he says. Most cats I worked with aren’t even on half the grind as he is and they can’t follow through with anything. I’m mad appreciative of the time Symphony has invested in Cluniac. Hit my dude up for biz for real.