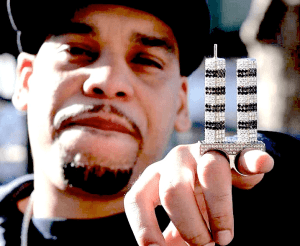 Without the backing of a major record label, St. Laz has enjoyed a tremendous amount of success over the past few years. St. Laz’ success has proven artists do not necessarily need a record deal to achieve high success levels. In New York City, St. Laz stands as one of the hottest artists out, alongside many mainstream artists.

St. Laz can often be heard on popular New York radio stations, Hot 97 and Power 105.1. After being a part of over 1,000 mixtapes, St. Laz feels great about his efforts. In addition to being heard on two of the biggest radio stations in the United States, St. Laz has also had his music videos played on BET and MTV.

Collaborating with the likes of Jadakiss and Jim Jones, St. Laz is known by many on the enormous New York hip hop scene. St. Laz is considered by many as a legendary mixtape artist, as he recently won the Juggernaut Award at the 2012 Underground Music Awards. Hip Hop Vibe recently spoke to St. Laz and he spoke on his role on the New York hip hop scene and his success on the mixtape level, without the security of a record deal.

In the eyes of many, you are a mixtape legend in New York, how do you respond to this? Mixtapes are the tool used to infiltrate the music industry, I’ve been on thousands, I’m grateful that my presence is recognized.

You have had the opportunity to work with numerous big names and you have enjoyed much success, what would you consider the peak of your career? Definitely being played on MTV worldwide, I had dudes from Egypt and Africa telling me they saw the video, being unsigned and being seen on such a large scale was great.

What do you think separates yourself from the other rappers in the game? I have an extensive archive of conscious music, hundreds of songs of substance that have the power to correct wrongful thinking in the minds of misguided youth, it’s not all about money, sex and drugs with me.

Being from Brooklyn, a legendary hip hop borough, which legends inspired you to pick up the mic? Tupac Shakur, The Notorious B.I.G., Nas, Jay-Z, Big Daddy Kane, Slick Rick, Rakim, and many more. I am a student of the game.

Since you have been so successful without the backing of a major label, would you even consider signing with a major? The game has changed, the death of the CD changed the whole climate of the music industry. Right about now, whoever can promise big promo, TV placement and day time radio rotation, I’m willing to talk.

How do you feel the internet has helped your success? If it wasn’t for the Internet, I wouldn’t have been able to reach thousands and thousands of fans, I’m an Internet OG, I’m one of the pioneers of gorilla web promo.

You recently won at the Underground Music Awards, can you talk about that? Yeah, the Juggernaut Award, I’m very appreciative of it, it means I was voted the most unstoppable force in the underground rap world, I can’t be stopped by anything or anyone, I’m just glad it’s finally been recognized.

Has your willingness to work with international artists also helped you advance? Hip hop is worldwide, I respect any artist that love the music and culture, we’re brothers related by hip hop.

Can you let fans in and update them about your next project? So many things going on, I can’t even say, but another major single and video with a major artist is coming, it’ll be huge. In the meantime, look for the Opium video for “Hood” dropping soon. Thanks, peace!