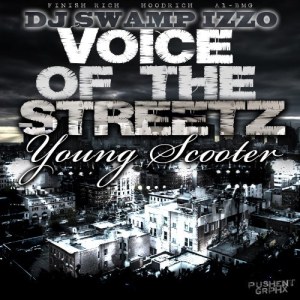 Evidenced by the amount of talent coming from the city, Atlanta is home to one of the hottest hip hop scenes in the game. Last year, Rocko, known for his breakout hit single, “Umma Do Me,” produced a star in Future. With Future now one of the biggest new names in the game, he and Rocko are working with Young Scooter.

Young Scooter, in his own right, has been making a name for himself. Among those he has collaborated with include Cartel MGM and Waka Flocka Flame, of Brick Squad. Building his own name and with his work with Rocko and Future, Young Scooter is a fast-rising star in the game. Currently, Young Scooter is preparing to release his $treet Lottery mixtape.

Before he even releasing $treet Lottery, Young Scooter already has his next mixtape in the works. Young Scooter teamed up with DJ Swamp Izzo for his latest project. DJ Swamp Izzo, of the Hoodrich movement, will be hosting Voice of the Streetz. One of the biggest names on the Atlanta mixtape scene, Young Scooter has become just as the title says.