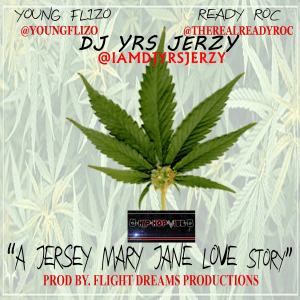 Since the start of the summer, DJ YRS Jerzy made it clear his focus was back on the music. In the time since then, DJ YRS Jerzy has lined up projects with many rising artists in the game, among them Chad Haynez, J’MEL, 9 Milly, Chox-Mak, and Cliff Po. Recently, DJ YRS Jerzy began working with fellow New Jersey native, Young Flizo.

The two have been on a roll with new music, yesterday DJ YRS Jerzy joined Flizo on a new version of his previous song, “Streets.” Now, the two have come together for yet another track. Their new single features Ready Roc, of Gilla House, and the track is titled “A Jersey Mary Jane Love Story.”

Earlier tonight, the song was released. An track released exclusively to Hip Hop Vibe, the song is one of many upcoming tracks from DJ YRS Jerzy and Young Flizo. The appearance from Ready Roc does not hurt matters for the two rising hip hop figures.