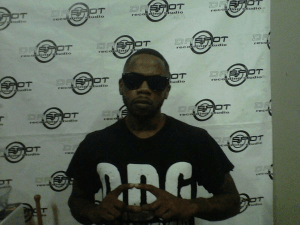 Over the past five years, J-Hood has been a fixture on the mixtape scene. Upon leaving his label home at D-Block, J-Hood immediately established his On Da Grind movement. It has been five years and the movement is going strong. After releasing a series of mixtapes, J-Hood is preparing to release his EP, Don Status.

What has been a five year journey has shown much growth from J-Hood as both a man and a lyricist. J-Hood has built a sizable following through his mixtape series, leading to high anticipation for his EP. As far as independent artists go, few names hold more clout than J-Hood.

Hip Hop Vibe recently had the opportunity to speak to J-Hood, as he prepares for his upcoming EP, Don Status. During our conversation, J-Hood spoke on his mixtape history, his upbringing, the new EP, his war of words with Gudda Gudda, and much more.

Out of all these locations, which do you consider to be your home? Both of them is my home. I have a spot in Charlotte and a spot in New York. It is in New York where I lay my hat, but Charlotte is definitely my second home.

Before mixtapes became popular for all artists to use, you were on it, how does it feel to be a mixtape pioneer? It is what it is. I just try to keep working hard and grinding right now. I want to keep my name out, so I just keep releasing music. Due to the grace of God, I get more respect than the average for my mixtape history.

How many mixtapes have you dropped? (Laughs). I can’t even pinpoint an exact number. I have been on the underground for about eleven years. It is up there in the twenties for sure.

Can you tell us more about your Don Status EP? Don Status is my EP, it’s seven original songs. I wanted to give people some unexpected tracks from me. I decided to do something different from the mixtapes, get some collaborations, and show people what I am made of. I feel like a Don, so this is my Don Status, I’m the don of my crew. On this project, I give my people some of the spotlight.

Two or three of my in-house producers did a lot of the production on Don Status, so they get a little shine.

Do you feel as if you have graduated from the mixtapes now? I wouldn’t say graduated, because the mixtapes are what pay my bills, the mixtapes keep the food on the table, supporting my family, and all of that. I have not quite graduated, I feel I can do both. The streets are behind the mixtapes, so that is where the support is.

Is Don Status your attempt to gain attention from major labels? I would like for it to catch the ears of major labels, so I guess so. There is definitely some hot material, so they should listen. Some people may not understand the meaning of Don, but it means someone who does for themselves. I do not rely on anyone, I have my own camera crew, I do everything myself.

What has led to your hard feelings toward Young Money’s Gudda Gudda? You know what’s so funny? I don’t even know him, we crossed paths before his crew blew up. We do not have real beef, but I was not feeling the whole Young Money thing, where they are trying to take hip hop. People have power in the industry should be steering hip hop back into the real, as opposed to where they are leading them, tight pants and the bright colors.

The young kids who follow him do not know any better and these people have a lot to do with that. That was for Wayne, but with Gudda this is chess, I am not in a position to go after the head, so I went after the knight for the crew. He dropped some lyrics on Twitter, I re-tweeted and asked when Wayne was going to drop his album and then he responded sort of crazy and then I went up in him.

While you are not fond of Young Money, could you see yourself collaborating with Jae Millz? No, not at all. Me and Millz used to be cool a while ago. But, when you are with different crews, you have to take sides. When it’s war, it’s war. We have not spoke in a while, but I am sure he would not want to work with me. But, he’s alright, I have no problems with him.

Okay, so who do you see yourself collaborating with? I can’t really pinpoint who I see myself working with because everything is subject to change. But, I have Murphy Lee, Compton Menace, one of Game’s dude, Twin from Infamous Mobb, 2 Pistols, I also have Huey, Lil’ Flip, and then one of my artists, Stikk Man, one of the ODG bosses.