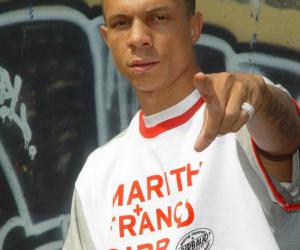 Ironically, Po is known for being on both sides of the lens, as he has used his Crack City brand to showcase his career as a rapper. Crack City DVD is nearing a decade old and helped inspire many to create hip hop DVDs. While there are several DVD series, Po has managed to keep Crack City DVD on the cutting edge.

Crack City DVD recently filmed with Swizz Beatz, as he assumed his new role with the Samsung brand and behind the scenes of Rick Ross’ “Hold Me Back.” For Po, this is the life he is used to, but it still amazes many. A native of Philadelphia, Po has lived and traveled all around the United States in the name of Crack City DVD.

Earlier this year, Hip Hop Vibe and Crack City DVD joined forces. In the time since then, Po has continued adding to his already-historic legacy. One of the more interesting videographers in hip hop, Po agreed to allow Hip Hop Vibe to go “behind the lens” with him.

Who were among the first people featured on Crack City DVD? At the time, we had a record label, Darkside. The label consisted of myself, the Darkside group, we featured ourselves and some mainstream artists on it.

What led to you focusing more on the DVD, as opposed to the mixtapes? There were so many people doing mixtapes already, so I decided to make a mixtape DVD. We even had a DJ for it, DJ C-Style. We wanted to have him do some slashing, we did some video editing and featuring interviews. I started out as a DJ, so I wanted to keep the DJ-ing involved. I always liked real hard street videos. We started doing hood videos and began working.

Who did you first shoot videos for? The first video was myself, I did my own interview. Then, I did one with my brother, Swizz Beatz was next, he was our first celebrity interview. When I bought my new camera, I called him, he wanted to see it and then we did a long interview. Some of everyone from the industry was there, so we were set.

How did you link up with Swizz Beatz? We linked up through a mutual friend. When Philadelphia got crazy, we moved down to Atlanta. I met a kid named Daeo in high school in Atlanta. Back then, I was DJ-ing and Daeo approached me and then we linked with Swizz Beatz, who also went to high school. Me and Swizz ended up becoming cool, but we did not talk until much later. When we met again, it was all love, so we built a relationship. Me and Swizz linked up at a party, I had a car, so we became partners in crime. Then, we went from clubs to studios, and tours. I did my first tour at sixteen years old. I called my mother and told her I was in New York when I was at the Apollo in Harlem. She said “Boy, you are out of your mind, have fun.”

In Atlanta, me and Swizz Beatz used to DJ and host parties, we were underage with older people out all night. But, we still went to school the next morning. We used to skip the first three periods. The teachers knew we were doing real work, so there was no major issue.

What was it like shooting with him recently? It was crazy (laughs). Words cannot even describe the way we are moving right now. The ESPYs told me I was the first person to film them behind the scenes. The producers told me that I was the first. We are around so many stars, it was crazy.

What was it like working with Rick Ross? Just like working with Swizz Beatz, he is a dedicated, hard worker, who believes in his craft. A lot of people talk about his past career, but it’s all about music at the end of the day and he makes good music. His whole team got hits. I am a Philly dude and he signed Meek Mill, shout out to him too. This was our third time shooting with him and his work ethic is strong, he’s on it.

Since you are from Philadelphia, do you see yourself shooting with Meek Mill in the future? I talk to Swizz about that every day. Even if I do not work with him, I would just love to walk up to him and shake his hand. I remember Meek Mill from back when he had the braids, I told them to be on the lookout for him. Back then, I always told people to look out for him and now he’s running with Rick Ross and Maybach Music.

Working with all these big names as a videographer, how do you still find time to record? Man, when I was a kid, we watched the sun come everyday. My friend told me I’m a day vampire, I never sleep. Usually, my sleep comes when I’m riding, maybe an hour or two a day. Everyone I know does music, so I’m always close to a studio. It’s nothing for me to continue recording. I even record in hotel rooms, it does not take much to do a song.

I remember growing up, Swizz Beatz would make a beat in five minutes. If it took longer than that, he would not even like the beat. We are all about speed on our end. Everyone really wants me to go back beatmaking. Out of all that I do, my beatmaking is the best.

When did you realize you fell in love with videos? When I did my first one, I shot with my cell phone. The video was called “Showgun.” The neighborhood where I sold mixtapes is where I shot the video. The whole neighborhood came out to support it. I had this guy to shoot my videos at first, but it was breaking my pockets. Soon, I learned to do it on my own, got the program, bought the camera and had interviews with Kia Shine, Swizz Beatz, Rick Ross, T.I., and so many more.

What was it like working with Kia Shine? I spent a lot of time with him, he seemed to be very passionate.