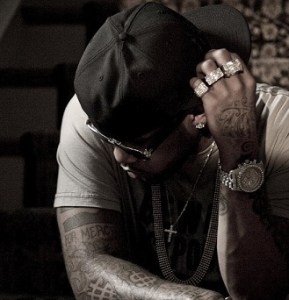 50 Cent may be unimpressed with the recent efforts from Lloyd Banks, but the rest of the hip hop world, including Carmelo Anthony, are pleased. Earlier today, Lloyd Banks released a promotional video in celebration of V6: The Gift. The mixtape went platinum on DatPiff.com and Carmelo Anthony congratulated Lloyd Banks in the clip.

At the end of the video, Lloyd Banks revealed he and DJ Drama would soon collaborate on a joint mixtape. Back in May, 50 Cent teamed up with DJ Drama and the two went on a run promoting The Lost Tape. The mixtape was well-received by most fans, but many were unsettled with the comments 50 Cent made about G-Unit.

Lloyd Banks and Tony Yayo immediately responded to the comments, securing release dates for their mixtapes. However, 50 Cent still said their efforts were not enough, urging them to do more. While Lloyd Banks did not quite take his boss’ advice, he is following in his footsteps, working with DJ Drama on his next project.