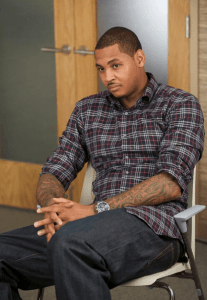 There is new energy in New York City, as the Knicks are playoff contenders, making the playoffs for two consecutive years. The hip hop scene in New York City is also doing well, Lloyd Banks has remained a bright spot for the city. An original member of G-Unit, Lloyd Banks went on a mixtape spree in 2003, building a name for himself outside of 50 Cent. Recently, it was revealed the relationship between 50 Cent and Lloyd Banks was strained.

In response to the criticsm from 50 Cent, Lloyd Banks released V6: The Gift, his previously long-awaited mixtape. While 50 Cent was unimpressed with the efforts from both Lloyd Banks and Tony Yayo, Carmelo Anthony was pleased with his work. Recently, the gold medalist released a video in which he reached out to Lloyd Banks. Carmelo Anthony congratulated Lloyd Banks on the release of his new mixtape in a recent video he released.