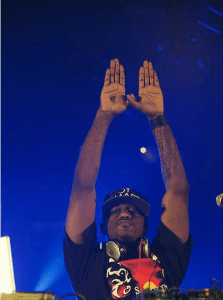 The legacy which is Wu-Tang Clan is one of the biggest in hip hop and has served as the inspiration for many of today’s biggest stars. There are many in hip hop who have dreamed of being a part of the movement. For DJ Symphony, his addition to Raekwon’s camp put him on the fast track to success. A chance meeting with Raekwon helped turn DJ Symphony into a known figure.

DJ Symphony finds himself one of the fastest-rising DJs in hip hop. In addition to his work with Raekwon, DJ Symphony also works with legends such as Ghostface Killah and has worked with Sheek Louch, along with many others. Another major title DJ Symphony has taken on is radio station program director, as he is the head of his own station, Radio Invasion.

Radio Invasion, launched a little under a year ago, has built a solid fan base, as the station serves as an outlet for independent artists. DJ Symphony has taken much pride in the overall growth of his brand, which includes the Radio Invasion. Hip Hop Vibe spoke to DJ Symphony earlier today and he discussed how he met Raekwon, Radio Invasion, Wu-Tang Clan, and much more.

DJ Symphony: Before we start this interview to let me say rest in peace to DJ Kashief, my brother.

How long have you been in the music industry? Twenty two years. I started DJ-ing in my early teens and I am still rocking it. Everything is solid.

Was it during this period when you met Raekwon? No. I did not meet Raekwon until 2004.

Did you two immediately begin working together? No. After I met him, I met him as a fan before working for him. I used to see him all the time and I would get DJ drops from him. Back then, I used to use his drops for mixtapes.

How did you get over these jitters? It definitely was not easy (laughs). Raekwon is a perfectonist, he has been in the game so long, he knows what he wants, how he wants it, and he knows how he wants his DJ to present it. Getting over it was not a big factor, but I had to get over it to keep my job with him. Like I said, he is a perfectonist and when it comes to the music, the stage, and the creativity, there is no room to have jitters.

How has working with Raekwon increased your own brand? I went from zero to sixty in about 1.3 seconds. I already had a brand as DJ Symphony, but the brand was not stamped with that official co-sign. When Raekwon took me under his wing, I met other artists. I began working with GZA, Ghostface Killah, N.O.R.E., Sheek Louch, and others. I met them through Raekwon, his brand increased mine, tremendously, simply based on the love and respect fans have for the Wu-Tang Clan. To be a part of that legacy has definitely taken my career to the next level.

When did you launch Radio Invasion? Radio Invasion is not even a year old. I did not launch the station until October 29, 2011, so we are still rather new. It started as one page that was on my original website, DJSypmhony.com. I had a radio show on the site, but I took it and made Radio Invasion, officially launching on my daughter’s birthday.

If you are an artist that wants radio play, go and upload your music to RadioInvasion.com right now, it’s FREE. It is free, so artists need to take advantage. I wanted to focus on indie artists who do not have a chance at getting mainstream radio play.

Do you have any new mixtapes in the works? Yes. I am currently working on the pre-album for Ghostface Killah’s new album. The name of the project is Certified Crack: The Best of Ironman, the mixtape is dropping on Halloween 2012. This is the mixtape to promote the Supreme Clientele 2: Blue & Cream album by Ghostface Killah.

I am also working on Certified Crack: 2 Chainz vs. Rick Ross and it will be released on October 5, 2012. Slots are available if you would like to have your song placed on this mixtape, text (415) 350-1623 for more details.

How do you feel about the current role of such DJs as DJ Drama and DJ Khaled? Right now, I feel I am on my way to doing the same exact thing as those guys. I like the current roles these guys are playing in hip hop. They are actually showing the artists that the DJ is very important in this hip hop game. Without the DJ, the rapper does not exist. The reason I say this is because we play the music the world hears today. I salute the likes of DJ Drama, DJ Khaled, and those like them. They brought the importance of the DJ back to the forefront of hip hop.

When will you release an album of your own? I am currently working on my album, no release date it set for the project and I am putting together my own record label.

Can you tell us more about your record label? I can’t let the cat out of the bag just yet (laughs). Everything is still in the works, but the label will focus on independent artists. We are scouting for acts who are on the rise and we are open to artists of all genres, hip hop is not the primary focus.