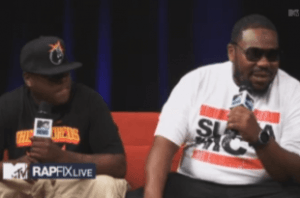 Hard to imagine, to those who remember, it has been ten years since the high-profile feud between Jadakiss/D-Block and Beanie Sigel/State Property. Their battle put a strain on their associated companies, Ruff Ryders and Roc-A-Fella Records. Despite this, the feud went down as one of the biggest in hip hop history.

As time went on, though, all of the feuds during this time would end. Ten years later, Jadakiss is on the couch with Sway Calloway for MTV’s “RapFix Live” sitting with both Beanie Sigel and the entire State Property. After Lupe Fiasco left, Sway Calloway ended up speaking with Jadakiss and Beanie Sigel about their feud.

With both rappers working on their first albums in years, they reflected on the high-profile feud, which nearly put a strain in the relationships with Swizz Beatz and Jay-Z.