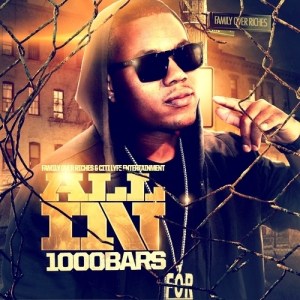 Atlanta is currently enjoying a major comeback, as many of the biggest new stars in hip hop have emerged from the ATL. Along with a few other names, 1000 Bars is among the new rappers from Atlanta who are experiencing success. The Atlanta mixtape scene is hot, building new stars by the day.

1000 Bars has come up through the Atlanta mixtape and recently released his own mixtape, All In. The project features many fellow rising Atlanta mixtape rappers, along with such established veterans as Rocko and the late Pimp C. Though he has taken a backseat in recent years, Rocko is behind the success of Future.

With these contributions behind him, the reception has been well for 1000 Bars’ latest mixtape. In a little over a week since being added to DatPiff.com, the mixtape has done impressive numbers. All In has well over 20,000 views, plays, and downloads.