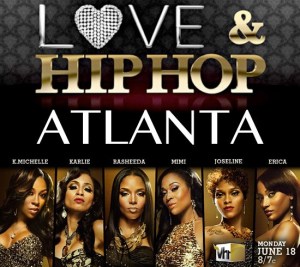 Dating back to the Celebreality days, VH1 has gained large audiences for their reliance on stars of the past in reality shows. Over the years, VH1 became known for their “Batchelor”-esque dating shows, such as “Flavor of Love” with Flavor Flav and “For the Love of Ray J,” starring Ray J. In recent years, shows centered around hip hop artists working on new music.

VH1 found much success with their “Love & Hip Hop” series. Launched last year, VH1 has built a solid following through the show. The flagship series focused on the ongoing relationship woes of Jim Jones and Chrissy Lampkin. During the early stages of 2011, “Love & Hip Hop” and “Basketball Wives” exchanged during seasons. In the middle of an offseason, VH1 revealed “Love & Hip Hop” was going to Atlanta.

There is a current hip hop boom in Atlanta with T.I. and Young Jeezy going strong, while newcomers, such as Waka Flocka Flame, Alley Boy, B.o.B., Ca$h Out, 2 Chainz, Future, and many others have risen to prominence. However, before they emerged as stars, those on the rise included Lil’ Scrappy and Rasheeda. While their music careers have taken numerous turns, VH1 has turned them into reality television stars, placing them on “Love & Hip Hop Atlanta.” The lives of these people have introduced millions of viewers to Stevie J, Joseline, Lil’ Scrappy’s mother, Mama D, and many other interesting figures.

Many called the flagship “Love & Hip Hop” series controversial, but it does not hold a candle to the things which have taken place on the Atlanta edition. Among the highlights of the first season of “Love & Hip Hop Atlanta” include the fight between Lil’ Scrappy and Stevie J, which took place after Erica Dixon, Lil’ Scrappy’s on/off lover, got into an altercation with Stevie J. Another ongoing issue in the series was Stevie J’s love triangle with Mimi and Joseline, which was the source of numerous fights. While everyone was fighting, Lil’ Scrappy’s mother, Mama D, was helping her son get things organized to relaunch his music career.

“Love & Hip Hop Atlanta” was filled with numerous fights and arguments and many fans have still been left with questions, as the first season recently wrapped. Answers to such questions, as Lil’ Scrappy and Erica being engaged, along with who Stevie J will ultimately choose, will be answered when the reunion show airs.