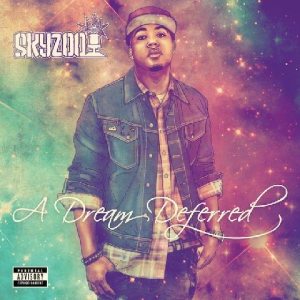 For years, Skyzoo has been one of the biggest mixtape rappers in the game. Skyzoo is the favorite of many on the mixtape level. A native of Brooklyn, Skyzoo eventually signed with the legendary Duck Down Records. Working with a legendary label, the popular Brooklyn rapper has a new mixtape in the works.

Skyzoo has talked about his mixtape, A Dream Deferred, for several months now. A few songs have been released and now the details are set to emerge. The release date for the mixtape was revealed to be October 2. Along with the date of release came the official cover of the project.

Discussing the cover, Skyzoo said “The idea was to demonstrate the feel of being in a dream and I wanted the album to represent that visually as well. Fabian’s work contains his signature star speckled background on all of his designs, so it made sense to use him with the stars representing a dreamy atmosphere. He’s an incredible artist and did an excellent job of bringing the theme of the album to life.”

The track listing was also released.