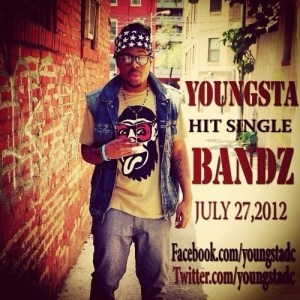 Among the growing hip hop scenes is the DMV area, which stands for DC, Maryland, and Virginia. Until the emergence of Wale, who eventually signed with Maybach Music, the overall hip hop scene was overlooked. But, with Wale placing a huge spotlight on the rap scene around the nation’s capital, many artists are pushing hard.

Youngsta is among the rappers from Washington, DC who are making a name for themselves. Much like Wale, Youngsta is releasing his music via mixtapes, which are available for download on the internet. However, Youngsta’s style is one all of his own, which is still catching on.

Late last month, Youngsta released “Bandz,” his latest single. The song has since gained more media attention. One of the rising independent hits, Youngsta has something successful on his hands with “Bandz.” Smitty Beats handled the production of the track.

Listen to “Bandz” by Youngsta below: