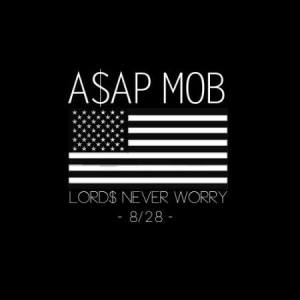 Among the new stars in New York City include the A$AP Mob, led by A$AP Rocky, who rose to stardom last summer. The popularity of his mixtape led to A$AP Rocky landing a lucrative record deal with Sony. In the time since then, A$AP Rocky has been working on his LongLiveA$AP album.

A$AP Rocky has become a fixture on the internet and on FUSE TV, sitting down for countless interviews over the past few months. It was during one of these interviews when A$AP Rocky discussed his debut album. LongLiveA$AP was revealed to have a release date of September 25 during the interview.

Immediately after announcing the release date for his own album, A$AP Rocky took to Twitter to reveal the A$AP Mob album. Titled Lord$ Never Worry, A$AP Rocky announced the album would be released on August 28. Today, the official artwork for the album was released.