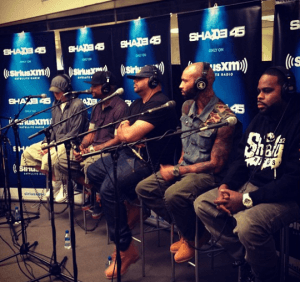 For three years, hip hop fans have been waiting for Slaughterhouse to finally release their Shady Records debut. Upon the inception of the group, fans wanted them to eventually join the roster of Shady Records. Eminem was interested in the group, but initially put together his own comeback album.

After re-establishing himself, Eminem signed Slaughterhouse and Yelawolf, thus forming Shady 2.0. Before this, Eminem took a five year hiatus, in which he battled drug addiction. Even though he was battling, Eminem took this downtime to expand into other business ventures, primarily his Shade 45 radio station.

Shade 45 has become one of the most popular hip hop radio stations in the time since then. Sway Calloway was given a prominent role with the station, hosting the morning show, “Sway in the Morning.” Last night, Sway did the honors of interviewing Slaughterhouse and Eminem. Speaking with his own station, Eminem said hip hop needs Slaughterhouse. The foursome discussed their new album and more with Sway.