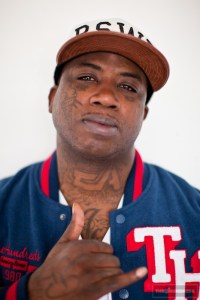 Through mixtapes, Gucci Mane has become one of Atlanta’s most popular rappers and one of the biggest names in the rap game. At previous periods of time, Gucci Mane has been signed to major labels and he has released albums. However, most longtime Gucci Mane fans primarily know him for the multitude of mixtapes he releases.

Gucci Mane is now working on the follow up to his I’m Up mixtape, which was hosted by DJ Holiday, as he discussed on Twitter. For several reasons, Gucci Mane is excited about this mixtape. Over the past seven years, Gucci Mane has released a number of mixtapes. With so many projects to his name, he believes his latest will stick out.

Earlier today, Gucci Mane revealed Trap God will be his next mixtape. The Brick Squad leader promised this project would be the biggest of his career. With the major proclaimation, Gucci Mane projected a release date for October 17. While fans wait on his next mixtape, Gucci Mane can be heard on DJ Spinatik’s latest project, Class in Session.