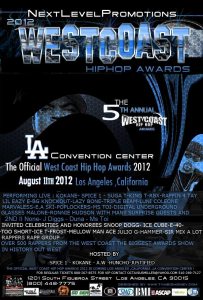 Being held at the LA Convention Center on August 11, Kokane will host the ceremony, alongside the likes of Spice 1, A. W., and Huncho Justified. In addition to hosting, Kokane will also perform at the show. Other legends who have been invited to participate in the West Coast Hip Hop Awards 2012 include Too $hort, Snoop Dogg, Ice Cube, and E-40.

Kim Kardashian said to be flattered by Kanye West’s “Perfect Bitch” song
2 Chainz holds listening session for “Based on a T.R.U. Story”