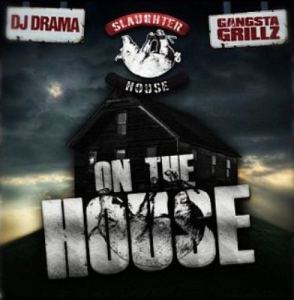 In three weeks, Slaughterhouse will release their long-awaited Shady Records’ debut, welcome to: OUR House. Along with Yelawolf, Slaughterhouse has become among the favorite new artists Eminem has on Shady Records. Their album has been met with several delays and is currently set for an August 28 release date.

With their album around the corner, Slaughterhouse has decided to warm their audience up with a new mixtape. On the House is the name of the new project, but it does not yet have a release date. The mixtape is also around the corner and will be out very soon.

Slaughterhouse is beginning to promote the project, which will be a part of DJ Drama’s mixtape series, Gangsta Grillz. Earlier today, Slaughterhouse released the official artwork of the mixtape. The mixtape will serve as the official prelude to the long-awaited welcome to: OUR House project.

Continue Reading
You may also like...
Related Topics:dj drama, eminem, gangsta grillz, on the house, shady records, slaughterhouse, welcome to: our house, yelawolf