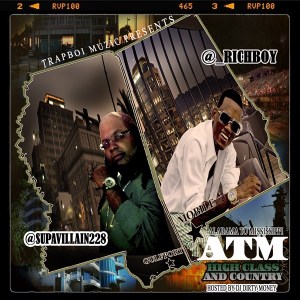 Six years ago, Rich Boy burst onto the scene with his “Throw Some Ds” single, which was produced by Polow Da Don. Rich Boy was signed to Interscope Records and was defined by many as a “ringtone rapper.” After the summer of 2007, Rich Boy was not given a second thought.

However, during the summer of 2012, Rich Boy has returned to the headlines, as his new record deal was announced. Along with Fred the Godson, Rich Boy signed to the legendary independent record label, eOne Music. Before the release of his sophomore album, Rich Boy teamed up with Mississippi rapper, Supa Villain.

A few weeks ago, Rich Boy announced his ATM (High Class & Country) mixtape, which is a joint effort with Supa Villain. Yesterday, following a steady release of tracks, the project was finally released. DJ Dirty Money, one of the biggest mixtape DJs in the South, hosted the mixtape.