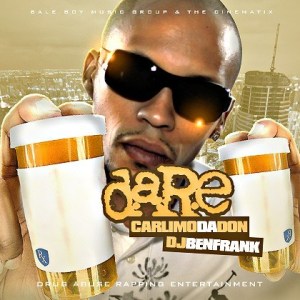 Charlotte is well on its way to becoming a booming part of the hip hop world, as the Queen City is full of independent talent. One of the biggest figures from Charlotte comes in the form of Carlimo Da Don. There is a growing number of Charlotte rappers and Carlimo Da Don is among the biggest names out.

DJ Ben Frank is also from Charlotte and he has become one of the biggest mixtape DJs in the game. His work has gained him attention and acclaim, as he has worked with many from Grand Hustle and other labels. While he has made a name for himself all over, DJ Ben Frank is still helping Charlotte artists reach their goals.

On D.A.R.E., Carlimo Da Don features a number of Charlotte rappers and rappers from the area. Among the features on the mixtape is Tim Stacks. Carlimo Da Don has put together a project that should catch the attention of hip hop fans well outside of the South. D.A.R.E. is obviously just the beginning for Carlimo Da Don, as he has much more in store.

Rich Quick adds verse to Murdah Baby’s “In the Zone” with Big K.R.I.T.
Zaytoven talks “Birds of a Feather” film