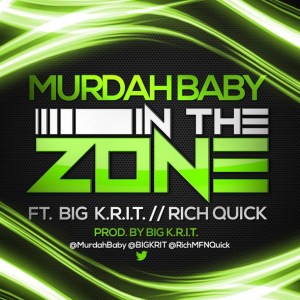 The New Jersey hip hop scene is booming with talent. Rich Quick is among the rappers from the Garden State making a name for himself. In the middle of a sea of rising emcees, Rich Quick is finding ways to separate from the others. Getting on popular singles has helped to raise his profile.

Rich Quick recieved a major boost when he joined forces with Murdah Baby, who was fresh off the release of “In the Zone” with Big K.R.I.T. Already, the song has been a success. The addition of Rich Quick has led to the single gaining a second life, as singles are easily forgotten in this day and age of technology.

On the official remix of “In the Zone,” Rich Quick continues to cement himself as the future of New Jersey hip hop. Already, Redman has gone on to enjoy a legendary career. Meanwhile, many others have had a bit of mixtape success over the past few years. Rich Quick, however, is showing the potential to be the next breakthrough artist.

Listen to “In the Zone” by Murdah Baby ft. Big K.R.I.T. and Rich Quick below: