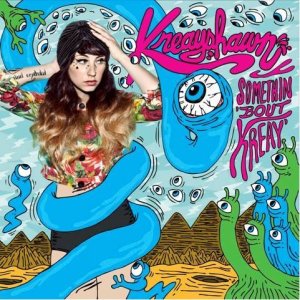 Last summer, Kreayshawn rose to fame with her “Gucci Gucci” single. The song quickly became a viral hit. However, Kreayshawn had run-ins with many over her usage of the N-word. Along with her White Girl Mob group-mate, V-Nasty, they ruffled feathers.

One of the first rappers to denounce Kreayshawn was Game. Despite being a female, Game openly threatened physical harm to Kreayshawn. Kreayshawn did not back down, calling him a “fake blood.” The most-notable feud Kreayshawn was involved in was with Rick Ross, however.

Releasing a freestyle, which dissed Rick Ross, Kreayshawn had a run-in with him during the 2011 MTV Video Music Awards. All the controversy in the past, Kreayshawn has released the official artwork to her Somethin’ Bout Krey debut. The album is due for a September 18 release.

T.I. will not release “Trouble Man” on September 4
Iggy Azalea talks evolution of her music with Vlad TV [VIDEO]