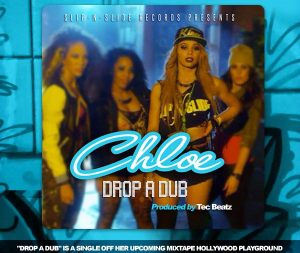 One of the biggest sensations of 2012 has been Chloe. She has been a breath of fresh air in the rap game, as the new face of Slip-N-Slide Records. For numerous reasons, Chloe has risen to popularity. Currently living in Los Angeles, as she furthers her career, her upcoming mixtape takes from this.

Chloe is preparing her new mixtape, Hollywood’s Playground, which does not yet have a release date. However, Chloe has continued to release new music to hold fans over. It has been a few months since “Bitch in the Back” and “6’4,” but Chloe proves she still has more in the chamber with her “Drop a Dub” single.

On Sunday, the official music video for “Drop a Dub” was released. Chloe, once again, flooded the internet with her clip. The music video served to generate additional interest in her upcoming project. Over the past week, the “Drop a Dub” music video has had a major impact on the hip hop game.

Watch “Drop a Dub” by Chloe below:

Continue Reading
You may also like...
Related Topics:6'4, bitch in the back, chloe, drop a dub, hollywood's playground, los angeles, slip-n-slide records