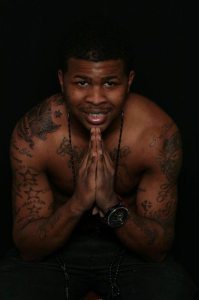 When many rappers speak of writing rhymes, they call it writing poetry. Many rappers have been so poetic, they have been labeled as poets. One of the most-recognizable was Tupac Shakur, who many also consider to be a poet. However, a rarity is hip hop openly having poets. In actuality, the one hip hop poetry group, The Last Poets, reference this in their title.

The Last Poets may have named themselves too soon, as Skeet Da Yung Poet plans to stick around for a while. His youth is referenced in his name and his words prove he is not letting poetry die, even long after his time is done. Skeet Da Yung Poet has made a name for himself through his poetry and his work with several companies, including Oil Spill Ent.

Skeet Da Yung Poet recently spoke to Hip Hop Vibe, explaining exactly how his entire persona came to be. Growing up in Miami, Skeet Da Yung Poet’s road to success is likely to have more curves than some others. However, all of the roads are leading to the proper destination and Skeet currently finds himself on the freeway.

As a result of having to take on such an adult role at such a young age, did it turn you into an “old soul” of sorts? It’s funny that you ask that because I get that all of the time, yes I believe I have an old soul because of that.
What was the relationship like between you and your stepfather? In any relationship, there will be ups and downs; and yes we had quite a few. We’ve been through a lot and, at one point, I I started to build a little hate for a second in my heart as a child; but I, not long after, told myself there are much better things to be doing than building hate and, of course, God gave me the ability to forgive at the age of 17. No lie, I’ve still learned a lot from that man and I still have love for him. But we have been good over the last few years; when we get on the phone we can talk for days now. The greatest feeling was even though we were over the past he said to me that he was sorry for all of the hurt he caused me and it’s being over five years so that meant a lot.
Now that you are older, will of have you, tried to connect with your biological father? Yes, we just recently started back speaking more, he’s still locked up; but he gives me a call when he can and we have chop it up and laugh. I still have love for him, as well, because regardless of his circumstances or what happened between him and my mother he tried staying in contact with me and he doesn’t have much to give, but he tries to give what he can.
When you wrote the Am I A Black African American? poem in high school, did things really begin to click for you? Not so much, I remember that day like it was yesterday. My teacher, Ms. Sadiek, gave us an assignment to do an ABC Dorian poem and my poem was Am I A black African American?; She accused me of stealing the poem because the fact of it being full of words put together which surpassed my age and her telling me that this has to be taken from a book. But, around that time, I wrote poetry for fun and when I was angry. Also, I sold love poems, teddy bears, and roses on Valentine’s Day, I was even selling hot dogs, salads, and etc. in school, so I would say that was the start of me being a businessman.
To many, Miami is considered a paradise of sorts. What was it like for you growing up there? Growing up here wasn’t all that bad. As a child, I didn’t go out much, I had my mind on other things while in high school, working part-time at wendy’s and practically running a business at school, having young freshmen sell for me. I always told myself I was going to make a difference. But, I remember one day having a gun held up at me in my cousin, I was only in middle school; but while being at gun point I told myself by any means I will make a difference and an impact on the world.
How did your affiliation with Oil Spill Ent. begin? Kind of out of nowhere, me and the CEO, Cognac Gunna, always chopped it up on Facebook, spoke when we seen each other, and most of all respected each others grind. He saw my grind and was looking for poets and I was interested. I’m always interested in being a part of a movement and helping out in any way I can.
While they use different methods, literary is not much different than putting together rap music, do you agree with this? Yes, I do agree. Tupac was a poet; the best rapper in my eyes. It’s just today, in the rap and hip hop industry, they are rapping about anything.
As a poet, you already rhyme, would you ever do rap music? As poet, yes I rhyme and sometimes I don’t, but I really don’t think there is a difference between poetry and real rap or even real music, I’m talking back in the days of Tupac. I actually will be releasing my first spoken word album before the end of this year and my second the beginning of next year.
What was it like when you wrote and then released The Black Book Vol. I: The Year of the Writer? Releasing the first of my three books; it was a great feeling to say I had something that was my own and I made it happen.
Is writing a book like writing an album, once you complete the first one, the others are so much easier? Depending on the artist, people like Tupac, B.I.G., and Lil Wayne have things written for days. Like myself, I have poems written for days, some will be put in books and some will be put in albums. I have a story to tell and it will get told one way or another.

In a little over a year’s time, you have become a relatively well-known author, how does it feel to see so many people embracing your messages?It feels awesome, having random people inbox me, approach me in person, tweet me or whatever the case might be telling me to keep doing what I am doing. I’m driven by four initials “S.D.Y.P” which stands for my stage name “Skeet Da Yung Poet” also stands for success, determination, youth, and prosperity. And the whole word singing that one day.

Who’s Got Next?… Bullet Brak
Welcome to Charlotte: An Introduction to the Charlotte hip hop scene