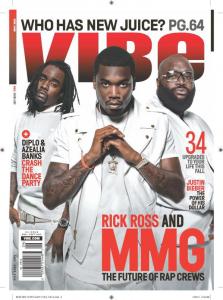 Regardless of how anyone feels about them, Maybach Music’s success is nothing less than remarkable. Their three headlining artists, Rick Ross, Wale, and Meek Mill are each three of hip hop’s biggest artists. Previously, they were on other record labels, taking secondary roles. But, it has been with Maybach Music where each has flourished.

Rick Ross is two days removed from the release of God Forgives, I Don’t. The album is expected to be a major success. Meek Mill plans to close August by releasing Dreams & Nightmares, his debut album. While last year was the year he proved he was a star, Wale is playing a supporting role in 2012 and plans to return in 2013.

The Miami Heat of hip hop were selected for the August/September edition of VIBE. Others featured include Azealia Banks and Justin Bieber.