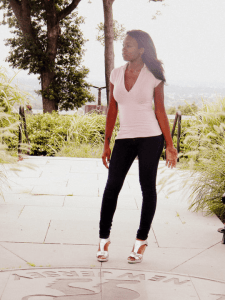 More often than not, the people who gain stardom originally hail from some small town. Hip Hop Vibe’s latest Hottie of the Week, Envii, hopes this rings true for her. Envii was raised in a small New Jersey town by her grandmother.

Growing up in this small town, Cliffwood, Envii began singing on the local church choir. Exceeding on the choir, Envii soon began pursuing a music career. In this pursuit, Envii also developed a penchant for dancing.

It was while dancing, Envii met Cliff Po, who became her manager. In the time since then, Envii has also dedicated much of her time to modeling. Envii has a number of talents and the look of a model. During her feature, Envii spoke on all of her interests.

What was it like growing up with your grandmother in Cliffwood, NJ? It was actually a real good life. My grandmother raised me in a middle class environment in a nice neighborhood, I was able to go to a good high school and was able to give me a semi-spoiled life. So basically I was somewhat a brat but I knew how to share.

Was your grandmother a big supporter of your dreams? She was always a supported of my dreams she just always stressed to me to have a back up plan.

As a mother, yourself, would you see yourself supporting your child’s future dreams? Of course, I will support my daughter in any and everything she wants to do.

Did you only begin singing after joining the choir in church, or was it always in you? Yes, but I really started to noticed that I actually had a really good voice when I was fifteen years old.

Can you explain the feeling you get when you are making music? The feeling I get is unexplainable. It’s somewhat like the feeling you get after you have had a good ass home cooked meal from your mom and/or grandma and there nothing like their cooking. It makes me happy and I feel free. It takes to a real good place and I don’t ever want to leave

Was it the type of music you were making which led you to dancing? Actually what started me dancing was the Aaliyah video “Hot Like Fire.” That beat was so sick and I love how smoothed she danced and I got up and copied. Ever since then I was dancing.

Is dancing now a passion, or something you do because it has opened doors for you? Dancing is just something I like to do but my first love is always and forever will be music.

It was dancing which introduced you to Cliff Po, correct? No, actually it was Cliff was doing his typical networking on Facebook and I guess he was looking through my pics and he asked me if I ever thought about modeling and I was like no I always wanted to be in music heavy and from there on me and him been trying to make things happen ever since.

Why did you name yourself ‘Envii’? Because, I don’t know many other people with the name Envy, or spelled like mine. Plus, I feel envied sometimes.

As a model, are there certain types of work you will not do? Yes there are. I will not do any type of degrading photos, or something that I would be ashamed of if my daughter ever saw my photos in the future.

How has modeling gone for you so far? So far it has been heading in the right direction and im excited to see what the future holds for me.

Which lane do you see yourself more focused on, as your career goes forward? My music, of course, cause like I’ve said before music will always be my first love, but which ever one I prosper in the most I will put more effort in even if its not my first love cause at the end of the day I got to do what ever is going to make my daughters life better than what it is now.

See additional photos of Envii below: 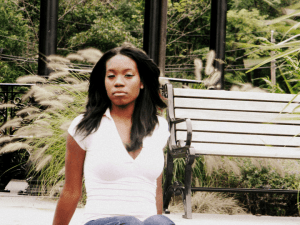 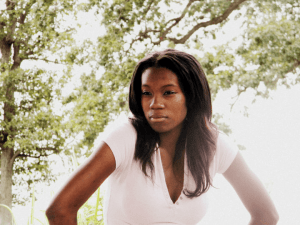