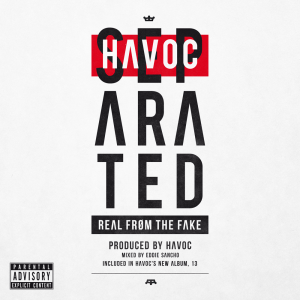 Four months ago, things apparently began to fall apart from Mobb Deep when Havoc seemingly began dissing Prodigy on Twitter. Among the things Havoc called his partner included gay, being in love with Rihanna, and thinking he was Jay-Z. For the obvious reasons, the tweets made headline news.

However, Havoc and Prodigy appeared together at the New York Knicks’ game against the Miami Heat later that night. Before the game, the Knicks had been on a winning streak. During this time, they nicknamed themselves Mobb Deep, crediting their bench. Both Mobb Deeps fell apart the same day.

During his interview with AllHipHop.com, Havoc confirmed the Prodigy rumors and has separated himself from many of his antics. Prodigy has longtime been the mouthpiece of Mobb Deep. It turns out most of the talking was for himself, as Havoc has gone solo, releasing his first single, “Separated (Real From the Fake).”

On the track he is going at an unnamed rival, as the audience should figure things out.

Listen to “Separated (Real From the Fake)” by Havoc below: