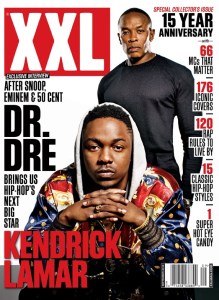 Over the span of fifteen years, XXL has been one of the leading hip hop publications, covering some of the biggest stories in hip hop. In the magazine’s infancy, XXL was caught up in the high-profile feud between 50 Cent and Ja Rule. Ultimately, their true issues were with the long-running hip hop publication, The Source.

As the feud slipped into irrelevance, XXL began covering the up-and-comers in the game. One year ago, Los Angeles rapper, Kendrick Lamar, began showing up on several radars. Releasing a steady flow of music and a critically-acclaimed album, Section.80, led to Kendrick Lamar working with Dr. Dre. This work led to a joint venture deal for his entire label and Aftermath/Interscope.

Dr. Dre has an impressive track record of both introducing stars, Snoop Dogg, Eminem, 50 Cent, and Game. The good doctor has also done well with assisting artists with their comebacks, his own, and those of 50 Cent and Game, only naming a few. Now, Dr. Dre appears on the cover of XXL alongside his latest protege.