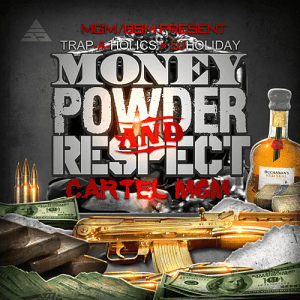 One of the fastest-rising members of Waka Flocka Flame’s Brick Squad Monopoly is Cartel MGM. For some time, Cartel MGM has been making an impression on the Atlanta mixtape scene. This summer, Cartel MGM enjoyed another year of dominance.

During the summer, Cartel MGM released his Plugg Brothers, Vol. 1 with fellow rising Atlanta emcee, Young Scooter. Closely following the release of his project with the rising A1 rapper, Cartel MGM appeared on $treet Money with Lil’ Phat, who lost his life earlier this summer. With this, his status continues to rise.

Recently, Cartel MGM revealed his solo mixtape, Money, Powder, and Respect. The upcoming mixtape will be hosted by Trap-A-Holics and DJ Holiday. Yesterday, the rising emcee unveiled the cover for the new mixtape. However, the wait on the official mixtape release is still on the way.

Shawty Lo talks G-Unit deal, 2 Chainz, and more with Q the Question [AUDIO]
Meek Mill warned by judge for lyrics in “The Ride”