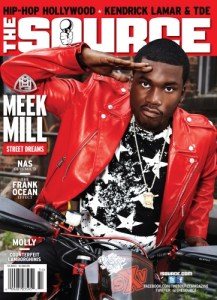 Rick Ross knew exactly what he was doing when he signed Meek Mill to Maybach Music. Meek Mill established himself as Philadelphia’s top unsigned artist a year before he was recruited by Rick Ross for Maybach Music. Releasing a series of successful mixtapes, Meek Mill was snatched up by what would become hip hop’s next powerhouse.

While still a mixtape rapper, Meek Mill soon achieved success on a national and international level. His mixtapes were well-received by his newfound bigger audience, as were his features alongside Rick Ross, Drake, and other big names. In 2011, Wale was established as a star, but the show was easily stolen by Meek Mill.

Due to the buzz he has amassed on the streets, Meek Mill was recruited by The Source, appearing on the cover of their August/September edition. Others featured on their cover include fellow rising rapper, Kendrick Lamar, the label which houses him, Top Dawg Ent., Nas, and Frank Ocean, along with many others. Meek Mill is to release his debut album, Dreams & Nightmares, on August 28.

Read an excerpt of Meek Mill’s interview with The Source below:

“It’s all about me thinking what type of first album am I gonna present to the people. [I got] something for the streets, the clubs, storytelling, soulful songs, deep songs.”