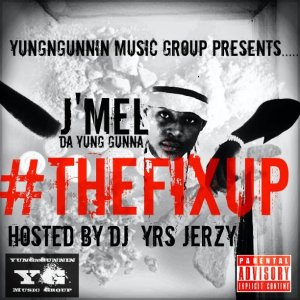 One of the most popular independent artists out is J’Mel. The rising emcee spent his childhood growing up in both Brooklyn and Atlanta. Due to growing up in both areas has led to J’Mel having connections with 1017 Brick Squad and the Coke Boys. All of this has helped J’Mel advance in what can be a difficult rap game.

As J’Mel has made a name for himself with various people, he ended up meeting the up-and-coming DJ YRS Jerzy. Two years ago, the two met and instantly built a strong working relationship. Their relationship has continued, leading to J’Mel reaching out to DJ YRS Jerzy to host his new mixtape, The Fix Up.

J’Mel is one of the many interesting rising rappers in the game. Among the relationships he has is also with Max B and his Gain Green movement. Hip Hop Vibe spoke to J’Mel about his new mixtape, The Fix Up, his relationship with DJ YRS Jerzy, and his experiences in the rap game.

How long have you been working on The Fix Up? At first, this was not even going to be a tape. I wanted this project to be leaks, which would serve as promo for my album, Gunna Lifestyle.

When did you decide to create The Fix Up mixtape? I decided to turn it into a mixtape after the first three songs. Me and Jerzy (DJ YRS Jerzy) had planned to do a mixtape together anyway. I felt the timing was right, since we were both on the come up and doing our thing.

What has it been like, working with DJ YRS Jerzy? Oh man, it has been a blast. Working with Jerzy is like working with my brother. He is not someone I just met, we met each other through mutual friends. The funny thing is, we are not even working on this mixtape in person. If we were, it would be much smoother than what it already is.

What type of impact has he had on the project? He has had a great impact on the mixtape. The project between us has been anticipated by many.

Which tracks have emerged as your favorites? I got two of them, actually, “Time’s Floating” and “Murder, Death, Homicide,” which features Murder Rah, produced by AArab Muzik.

Are you excited about the August 1 release date for The Fix Up? Oh hell yeah man! Definitely.

You also have connections to Brick Squad and the Coke Boys, right? Yes sir.

How did you link up with them? I have been rapping for a long time. I was a protege of Max B before he went in. He was going to work with me, but he went in. French Montana took Chinx Drugz, they went their way and the other people went their way. I went down to Atlanta and started my company. I ended up linking up with the Coke Boys due to our back story, real recognizes real.

I linked up with Brick Squad through OG Mack Drama, who is close to Waka Flocka Flame. He is a mentor to both me and Waka. Go follow him on Twitter @mackdrama1017. That’s the homie right there, shout out to him.

In addition to those, you are also a member of Max B’s Gain Green movement, how did that come about? That came about through Ty Black, Wave Gang, he is Max’s cousin. We are no longer Gain Green, it’s now Wave Gang. Gain Green is now run by Dame Grease and we are getting it in together now.