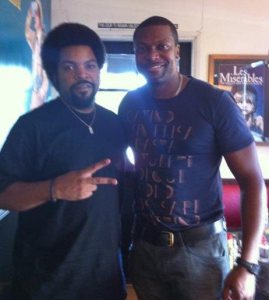 Following his role as ‘Doughboy’ on the critically-acclaimed Boyz in da Hood, Ice Cube experienced a growing interest in filmmaking. The Compton rapper soon began producing his own film. While Boyz in da Hood focused on the negative aspects of living in rough neighborhoods, Ice Cube wanted to focus on the positive aspects.

Ice Cube soon came up with a concept, naming the film Friday. Seventeen years after the premiere of Friday, the film remains a hip hop classic. Starring in the film is Ice Cube, Chris Tucker, John Witherspoon, Anna Maria Horsford, and Regina King. Others who appear in the film include late comedian, Bernie Mac.

When Ice Cube decided to put together Next Friday, he was unable to land Chris Tucker, thus replacing him with Mike Epps. Three Friday films have been released, to date, with each of them being considered a classic. However, the original remains the favorite of most fans, leading to many wanting the original cast back.

Over the past two years, Ice Cube has discussed the possibility of a fourth Friday, saying he would only do one if he could get his original sidekick, Chris Tucker, to return. Fans of the franchise have been interested in seeing Chris Tucker and Mike Epps sharing scenes, as the two never had. However, their characters did interact with each other off screen. Recently, Ice Cube revealed he has officially landed Chris Tucker for the new Friday film.