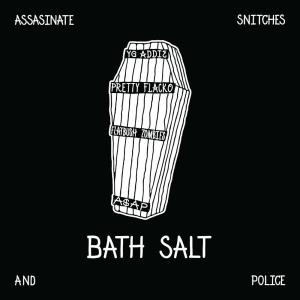 In a matter of months, the New York hip hop scene has gone from being irrelevant to being the breeding ground for many new talents. One of the biggest rappers to emerge from New York City over the past year has been A$AP Rocky. The young rapper is named after Rakim and is from Harlem.

A$AP Rocky has quickly become the frontman of the A$AP Mob, the popular rap crew from Harlem. The crew has been recording in New York City for years, but the efforts of A$AP Rocky has gained them fame. As Rocky has been promoting his upcoming album, the Mob has also had their own project in the works.

Recently, news of people using bath salt to get high has taken over the news, as bath salt users have acted very strange. A$AP Mob is currently preparing a new single with the name of the the odd, popular, drugs. Their “Bath Salt” single is in the works and will be released this upcoming Friday.