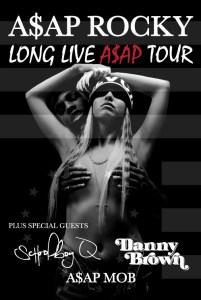 Aside from French Montana, A$AP Rocky has been the biggest sensation on the New York hip hop scene in some time. A$AP Rocky and the A$AP Mob have immediately become favorites and have helped return New York City to prominence in the hip hop world. Last year, A$AP Rocky released his highly-successful, LiveLoveA$AP mixtape and promised an album to soon come.

For most of 2012, there have been rumors of when A$AP Rocky would drop his album. Over the past few months, A$AP Rocky has dodged the question of when he would release his project. But, recently, A$AP Rocky spoke on when his new project would drop. A$AP Rocky revealed his new album would be released on September 25.

With the album, A$AP Rocky also has a tour planned, named after the album. On the LongLiveA$AP tour, A$AP Rocky revealed he will have ScHoolboy Q, Danny Brown, and of course the A$AP Mob, as special guests. However, A$AP Rocky will be the headliner for the tour.