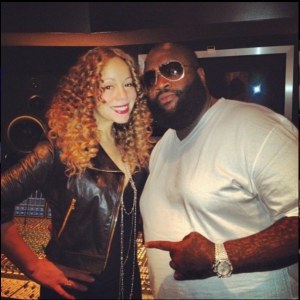 Rick Ross has been dominating hip hop for years, but it was not until recently when he cemented himself on top of the game. Part of this domination came into play during the expansion of Maybach Music, when he added Wale and Meek Mill. After those deals were completed, Rick Ross set up shop with Warner Bros. Records.

In 2011, Rick Ross enjoyed a dominating year, being featured on a number of hit singles. Late in the year, Rick Ross also had the opportunity to record with legendary songstress, Mary J. Blige. Over the years, she has recorded with all of the most-popular rappers of the time, but Rick Ross stuck out to her, as she praised his talent.

Mariah Carey is the latest legendary songstress to tap into the Maybach Music crew in search of a new hit. For her upcoming single, “Stay Triumphant,” Mariah Carey has decided to recruit both Rick Ross and Meek Mill for the record. While the artwork has already been released, the song will not fully debut until August.