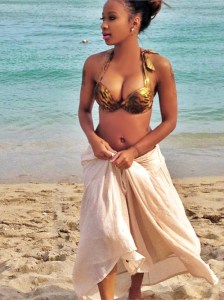 Arguably, the biggest moment in Diamond’s career came when it was revealed she had started dating Soulja Boy. At the time, Diamond was linked, romantically, to Lil’ Scrappy. It turned out, the Atlanta rapstress had left Lil’ Scrappy for Soulja Boy. Lil’ Scrappy soon responded to the news, wishing happiness and success to both Diamond and Soulja Boy.

Due to all three rappers’ then-declined popularity, there was not much more information about them following this. However, Lil’ Scrappy returned to headlines when he was cast in VH1’s spin-off series, “Love & Hip Hop Atlanta.” Immediately, Lil’ Scrappy began making media rounds, where he was frequently asked about Diamond.

Now, Diamond is making her media rounds, speaking with Power 105.1’s “The Breakfast Club” about a number of topics. Lil’ Scrappy previously spoke to “The Breakfast Club,” saying he paid for many of Diamond’s “changes.” During her interview, Diamond discussed Soulja Boy and possibly reuniting with Crime Mob.