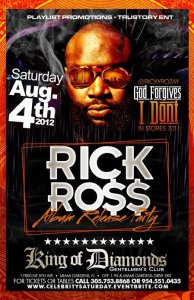 Over a year has passed since Rick Ross announced God Forgives, I Don’t. For various reasons, the album was met with several delays. Many of these delays came due to Rick Ross’ involvement in the building of Maybach Music. With the roster of artists on the label now stars in their own right, Rick Ross is preparing to release his own album.

In exactly two weeks, Rick Ross will release God Forgives, I Don’t. The album is the most-anticipated album of 2012, initially due for a December 2011 release. However, following the Maybach Music press conference, Rick Ross began preparing all the release dates. Thus far, Self Made 2 has done well and Rick Ross’ album is to follow.

Continue Reading
You may also like...
Related Topics:god forgives i don't, maybach music, rick ross, self made 2