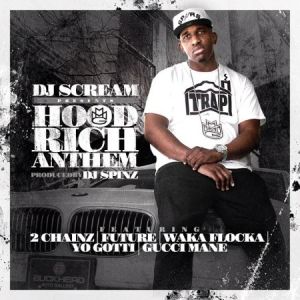 Atlanta is a force in the hip hop industry, once again. Among those possible for making this happen is DJ Scream and his Hoodrich movement. Last fall, DJ Scream ended up being signed to Rick Ross’ Maybach Music. Fellow Hoodrich member, DJ Spinz produced the popular “Cashin’ Out” single by Ca$h Out.

DJ Scream has enjoyed much success over the past year, hosting Rick Ross’ popular mixtape, Rich Forever. Earlier this year, DJ Scream revealed he intended to release his debut album. While not much information about his album has been released, there will definitely be a new single from DJ Scream.

The artwork for DJ Scream’s new single, “Hoodrich Anthem,” which features 2 Chainz, Future, Waka Flocka Flame, Yo Gotti, and Gucci Mane was recently released. While the song has yet to be delivered, the artwork has. Tomorrow, July 16, 2012, the single will premiere at 1:07 pm.

DJ Spinz provides the production for the track.