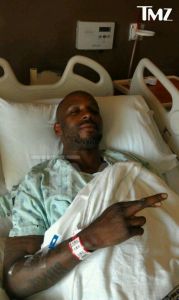 Throughout his career, DMX has always shown an interest in four-wheelers and motorcycles. This interest fits the overall style of the Ruff Ryders. In later years, Eve also prominently featured all-terrain vehicles in her music videos. Though he was a later addition to Ruff Ryders, Jadakiss also featured the bikes in his videos, in recent years, his “Who’s Real” video.

DMX, for various reasons, took a back seat from the rap game. Initially, DMX had retired from the rap game. When he tried to mount his comeback, DMX faced opposition from Jay-Z, his former rhyming partner. Despite the two working closely for years, DMX soon made it clear he and Jay-Z had never been friends, something third partner, Ja Rule, also confirmed. DMX released one album on Columbia.

Last year, DMX was released from prison and he began touring across the United States. Earlier this year, DMX returned with a new EP. The project is to serve as a warm-up to his upcoming seventh studio album, due later this year. While the music is still on the way, DMX had a set-back, as reported by TMZ, when he was involved in a four-wheeler accident, being hospitalized with a concussion.

There is no word on when DMX will be released from the hospital.