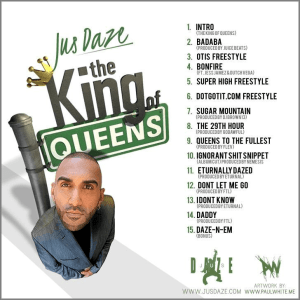 From 1998 until 2007, the borough of Queens, which has been the breeding ground to a number of hip hop’s elite, LL Cool J, Nas, and Run-DMC, only naming a few, was portrayed on CBS’ sitcom, “The King of Queens.” Starring popular comedian, Kevin James, the show was highly successful during its nine year run. Many Queens natives also became fans of the show.

Jus Daze was obviously one of these fans, as the shows title card is incorporated in the artwork of his new mixtape. There is much new talent on the streets of New York and they are emerging in different ways. Waiting on his big break to come, Jus Daze decided it was time for him to simply break through. In breaking through, Jus Daze released his new project, The King of Queens.

On the new mixtape, Jus Daze represents for his city, showing just how much hip hop has evolved in the area. Throughout the project, he pays homage to those who came before him, with a few of his tracks sampling Jay-Z, the most-recognizable Brooklynite. Still, Jus Saze put together a project worthy of full-blown album status in the form of his latest release, The King of Queens.