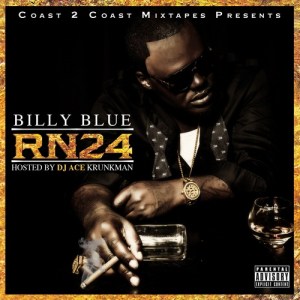 There is much more to the Poe Boy label than current pop/rap phenom, Flo Rida, who has made a home for himself atop Billboard. While Poe Boy is on top of the game with Flo Rida, they have more talent battling for position. Billy Blue is included among these artists.

Billy Blue has made a substantial name for himself even before his Poe Boy days and decided to drop a new project on July 4. In the four days since the release of RN24, hosted by DJ Ace Krunkman, Billy Blue has amassed an audience of nearly 30,000. It is those type of numbers that are propelling him into the mainstream.

RN24 features such Poe Boy artists as Brisco, but also features Plies, Juvenile, Detail, and Future, along with a number of other major artists. Teaming up with DJ Ace Krunkman, of Coast 2 Coast Mixtapes fame, was another power move for Billy Blue. The influx of talent on the street album has led to the successful results, thus far.