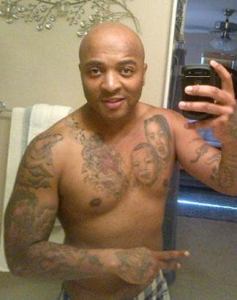 Yesterday, footage of 40 Glocc and Game getting into a fight leaked to the internet. For years, the two Los Angeles-area rappers have been feuding. Though they were once label-mates over at G-Unit Records, the rappers are said to belong to rival gangs. It has been several years of the two exchanging insults through several volumes of media.

Many felt it was only a matter of time before the two got into a physical altercation. Things came to a head when 40 Glocc and Game fought. Footage of the fight, showing 40 Glocc running from Game, leaked to the internet. Most fans immediately sided with Game, making a mockery of 40 Glocc.

40 Glocc recently spoke to Vlad TV, giving his side of the story. Though he admits to running away from the fight, 40 Glocc claims to have been jumped. While he is being filmed by the iPhone, 40 Glocc said several guys behind the phone had pistols aimed at him. Wanting to fight with fists and unarmed, 40 Glocc said he had no choice but to run.

Listen to 40 Glocc’s statement below: